What to Know Before You Buy

Waterboy vs. Salt Based

Enjoy peace of mind for you and your family knowing that every drop of water flowing through your home has been filtered by the finest whole house system available today, the Waterboy System by Superior Water.

Facts About Water Softeners Did You Know…

Our goal at Superior Water is to keep you updated and informed on the issues you confront and decisions you must make as a home owner about whole house water filters in a succinct, concise, easy to read format without drilling down into details. However, if you're interested in digging deeper on any of the topics seen here you will find links to sources of information outside our site that will provide you with further detail on each subject. For answers to more questions, see our FAQ

As many issues about our state's water supply converge, home owners have and will become more affected by legislation and bans on the use of water and water softening systems.
The problems we face as homeowners in searching for answers for our water needs stem from a depleting clean water supply and a growing population of water consumers.
The limited water supply must take care of our industrial, agricultural and residential needs today and for decades to come. Therefore, the waste and contamination of the water we do have is front and center as a concern for our state and local governments and environmental organizations.

The water we import as well as our local water supply is considered to be very 'hard' Water that is labeled hard water has a high amount of calcium and magnesium. Both calcium and magnesium are good for your health and are contributing factors to the prevention of heart disease, osteoporosis and inflammation of the joints among other health issues. But hard water also causes lime scale build up in household pipes and stains on fixtures and glass shower doors.
Click here for more detail on the health benefits of calcium and magnesium

The water we import as well as our local water supply is considered to be very 'hard' Water that is labeled hard water has a high amount of calcium and magnesium. Both calcium and magnesium are good for your health and are contributing factors to the prevention of heart disease, osteoporosis and inflammation of the joints among other health issues. But hard water also causes lime scale build up in household pipes and stains on fixtures and glass shower doors.
Click here for more detail on the health benefits of calcium and magnesium

What problems are created by water softeners?

Water softeners do not filter out anything but the minerals

Water softening systems are effective in reducing minerals in the water but do not treat other chemicals, pollutants and heavy metals thus leaving chlorine, chloramines, ammonia and other harmful contaminants in the water. As you will read about below, reverse osmosis systems must be installed as an addition to a water softening unit for drinking water because it is not advisable to drink water saturated with sodium or potassium. But even with a reverse osmosis system, the problem of showering and bathing in water containing harmful chemicals is not addressed by either of these systems.

Water that is saturated with sodium or potassium chloride

The first problem caused by water softeners is that water coming into your house for drinking and bathing contains sodium or potassium chloride. Many people do not like to brush their teeth or drink the water that has been softened so they have to add a filter that removes the salt. However, we often overlook the effect of bathing in water and the absorption of what the water contains into our body. The skin is the largest organ and absorbs water while we shower and bathe. It stands to reason that we should bathe and shower in the cleanest, freshest water possible.

Water softeners must be regenerated regularly adding to the amount of sodium or potassium saturated water going back to water treatment plants, and/or to rivers and the ocean.

Water softeners regenerate by flushing the buildup of calcium and magnesium in the brine in the cylinder. During the regeneration cycle the sodium or potassium saturated water is flushed into the sewer system. Along with normal waste water from bathing, doing dishes, laundry, etc. this is causing an environmental problem as well as a cost problem for water treatment plants.

What environmental problems are caused by water softeners?

There is cause for concern with excess salt levels (brine) being discharged into the sewer system. Because sodium and potassium saturated water can harm fish and aquatic life, impact crops irrigated with water, and affect downstream users, water treatment plants are under strict guidelines regarding the levels of sodium and potassium they can discharge. Reducing these levels is extremely expensive and wasteful compounding our water shortage issues in the state.

Sodium or potassium pellets have to be continually replaced

When owning a water softener, a burden that is placed on the home owner is to continually replenish the sodium or potassium. Salt can be purchased at the grocery store but then it has to be taken home and dumped into the tank. This is a chore that many don’t want or are incapable of performing. There are monthly services with a fee associated to them that will come out and do the work for you by either bringing the sodium or potassium or by exchanging the tank each time.

The membranes used for reverse osmosis have a dense barrier layer. In most cases the membrane is designed to allow only water to pass through this dense layer while preventing the passage of solutes (such as salt ions). This process requires that a high pressure be exerted on the high concentration side of the membrane.

What problems are created by reverse osmosis water filter systems?

Other than regular maintenance (replacement of filters which can cost up to $200 /yr) of the membrane, the main problem with RO systems is that they waste a significant amount of water. It is estimated that for every gallon of drinking water, the RO system flushes 3 gallons of water out to the sewer. This is up to a 75% waste of water.

Because of this waste, RO systems are not the optimal solution for water filtration in California and other states combating the effects of a declining water supply. Also using a reverse osmosis system as a whole house water filter is cost prohibitive and wastes even more water.

A point about healthy water

Reducing minerals in the water is one way of preventing lime scale build up in pipes and on fixtures. Water that contains minerals is said to be good for bones, teeth and blood.

In Review – The Pros and Cons

Water run through a water softener and then an RO system contains no minerals which is one of the benefits to the body of drinking water.

The WATERBOY Whole House Water filtration and Conditioning System from Superior Water addresses both the filtration of contaminants and hard water issues without the use of chemicals and monthly maintenance. It also does not waste water or send contaminated water down the drain to our rivers and water treatment plants.

How the Waterboy Cleans Your Water

The Waterboy uses granular activated carbon, quartz silica, and KDF (copper, zinc) to filter out chlorine, chloramines, ammonia, dirt, sand, chemicals, pesticides and heavy metals from your water supply. You then have fresh, clean water coming from every tap and shower in the house.

HOW DOES WATERBOY WORK?

How the Waterboy Treats Hard Water

To deal with the hard water issues we face in San Diego and other places, the Waterboy has a module used in 400,000 industrial applications to reduce lime scale buildup in boilers and cooling towers. Many large factories, condo buildings, commercial facilities need to decrease water consumption by not using salt based products.
Minerals have both a positive and negative charge. Due to the fact the fact that opposites attract, the positive charge in one mineral molecule will attract and attach itself to the negative charge of another mineral molecule and/or a negative charge in pipes and appliances. Therefore, minerals will clump together, and cause lime scale build up. This can cause damage to pipes and appliances in the home.
The module installed in every Waterboy whole home water filter uses a high-pressure magnetic force to cause a reverse polarization on the minerals. Instead of attracting to each other, pipes and appliances, these mineral molecules now repel each other and become suspended in the water.
Because of this process, the Waterboy is considered in many water softener reviews and comparisons to be a saltless water softener or a magnetic water softener even though it does not remove minerals from the water.

What is the benefit of the way the Waterboy water filter treats hard water?

The benefit to you is that minerals do not stick and adhere to plumbing, fixtures and appliances yet your family gets these minerals from the water they drink and by bathing and showering. This is the way nature intended water to be.

What maintenance is required on the WATERBOY Whole House water filter?

The WATERBOY whole house water filter requires no outside maintenance for typically 10 to 12 years of water filtration depending on usage. A few times each month the WATERBOY conducts self-maintenance by back flushing which regrades the media and flushes out contaminants. The water used during the back flush is drained into the yard or flower bed causing no water waste. Trees, flowers and grass flourish when watered by the WATERBOY.

A Few Extra Facts about Minerals and Water Softeners...

People often think minerals are contaminants and bad for your health. Actually, minerals are not considered a "contaminant" and are good for the taste of water and for vitality. Minerals also give you a healthy PH level for drinking water from every tap.
Water softeners are not the only way to treat minerals in the water. Non– chemical water conditioning systems are more environmentally focused to tackle the minerals without needing salt and chemicals.
Water softeners don't filter anything out of the water, like a filter would, they exchange sodium for minerals to create "soft water". Most people don't like that feeling of "soft water" because it creates a slimy feel like you can't get the soap off.
Hard water doesn't ruin clothes as much as hot water and chlorine in your water. Our system helps to keep clothes soft and colors bright.
Water softeners are unsafe for the environment since they waste water and the brine from the regeneration weekly is salty and downstream can kill and fish and plant life. Water softener alternatives and organic products are a natural and safe way to accomplish the same results.

Find more information here and on our FAQ page, or contact us and speak to one of our Water Quality Specialists today! 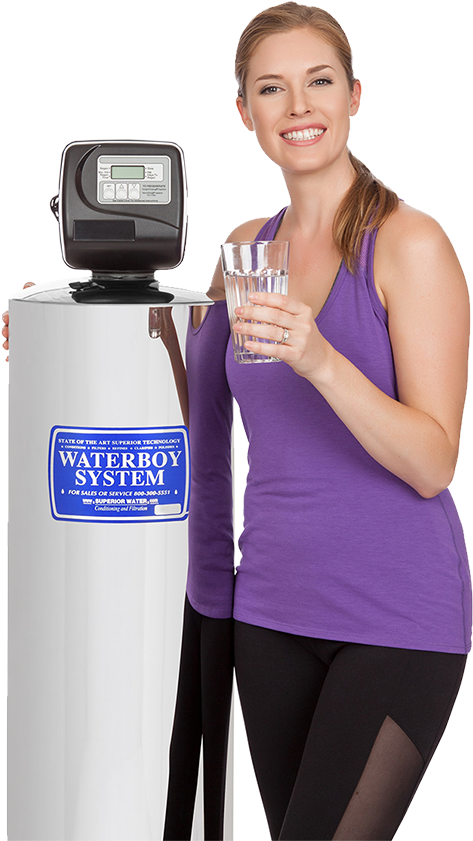