Posted at 20:43h in Blog, Water Filtration by Erin 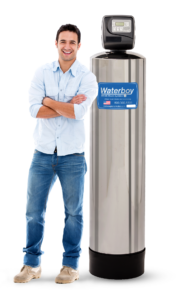 Hard water is not considered harmful to your health, but it can leave what is referred to as “scale.” Scale starts by appearing chalky, but it eventually builds up to form a hard layer of minerals. Scale develops when the minerals (such as calcium and magnesium) in the water settle in an area or when the water evaporates and leaves behind the powdery minerals.

These minerals not only leave deposits in faucets, shower heads, and drains, but also on dishes, glassware, sinks, and counter tops, as well as on vehicles that were just washed. And these deposits are very difficult to clean off.

Aside from the aesthetic issue, though, scale can have damaging effects. One of the most serious of these is when the scale builds up in pipes. This can reduce the flow of water and eventually clog an entire pipe.

Additionally, scale can decrease the effectiveness of toilet-flushing by 70 percent and faucet flow by 40 percent, and it can shorten the life of appliances such as dishwashers and washing machines.

Scale doesn’t have to go unchecked, though: Superior Water’s WATERBOY system can reduce scale in your home.